Chapels of the Cyclades

Home/Chapels of the Cyclades
Previous Next

Chapels of the Cyclades

Bleached by the Greek sun, sometimes alongside the wave and sometimes perched on a mountain top or hidden among rocks and dense vegetation, our chapels are of unique beauty and familiarity of Greek landscapes.

Below the umbrella of our blue sky, the white-white chapels stand tranquil and blend harmoniously with the unique Greek landscape. The farthest of them are awaiting a guest or the day of the saint’s feast to whom they are devoted to wearing their wares and flood the world. Everything has their own unique history and many of them are connected with myths and traditions of their place.

We have gathered some of them and we present them to you as summer approaches and one of us can be found near one of them. Enjoy them during your sailing cruise and do not hesitate to share them with your friends too. 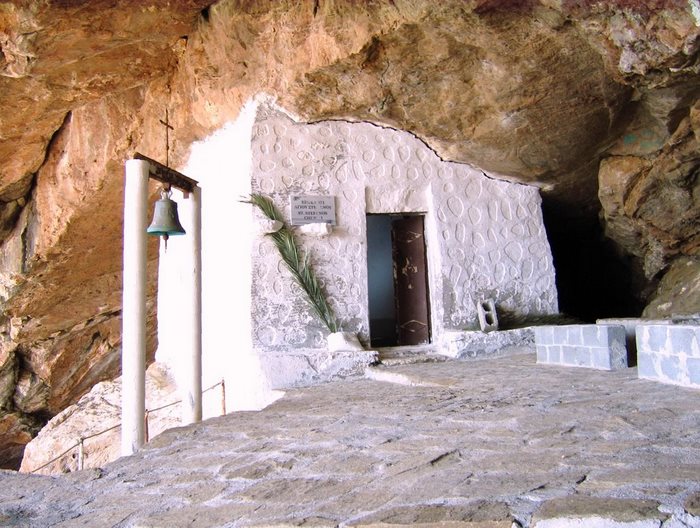 Agios Stefanos in the settlement of Galissas, southwest of Syros, is a small Catholic chapel built literally in a cave just above the sea. It did not need a floor and a ceiling to build it. Only two walls were built right and left. According to tradition, the chapel of Agios Stefanos built a fisherman from Galissas, Stefanos, who was in danger from a huge octopus that dragged him into the sea. He made a vow to Saint Stephen to save him and thus built the chapel at this remote point.

It is a small church on the hill above Klima. Beyond the interest it presents inside, it offers the visitor the opportunity to admire the island, the bay of Adamas and the sunset. 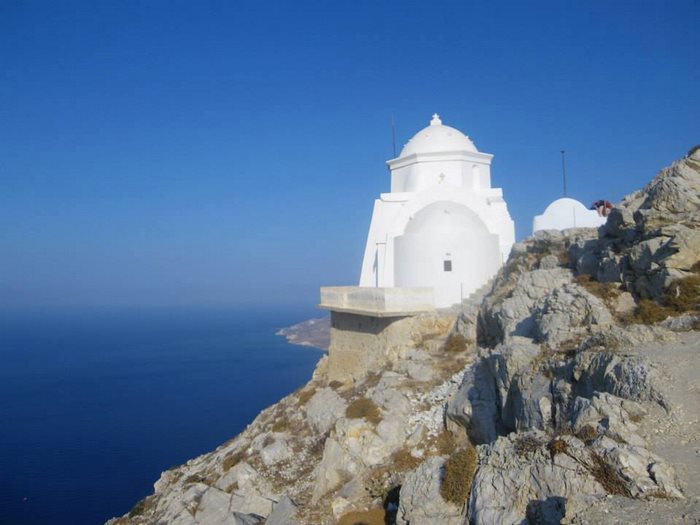 The Monastery of Zoodochos Pigi or Panagia Kalamiotissa is located on the narrow isthmus that separates the main volume of the island from the Kalamos peninsula. It is built in the place of the eponymous ancient temple of Apollo Aeglitis, which was connected with the city with the cobblestone Iera Odos (its parts are still preserved). The walls of both the church itself and its enclosure, which is part of the present enclosure of the monastery, are preserved to quite a height.

She is the patron saint of the island, the beloved Virgin of the inhabitants, who seek her grace for help and protection. Built on the steep hill of Kastri above the sea, it functions as an extra-ecclesiastic pilgrimage church, where many weddings and baptisms are held. The miraculous icon of the Virgin Mary was found there after a shepherd’s vision of the region in 1710. The wonderful natural environment, the vastness of the sea and the evocative religious atmosphere create the visitor a mental satisfaction and euphoria. 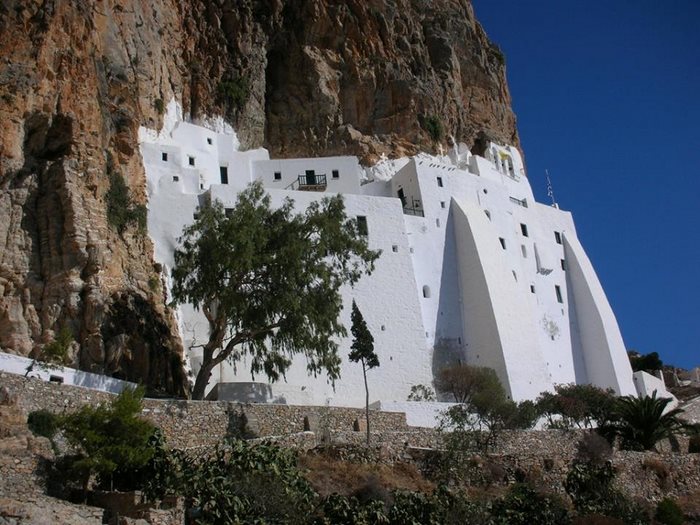 The monastery of Panagia Hozoviotissa is located in the southern, steep sloping shore of Amorgos. Nestled in barren, threatening rocks, it is only visible from the sea, which extends immensely beneath the rocks, 300 meters high. It’s white, unobtrusive face blends admirably with the colorful, uneven rocks. Only white geometric volumes and strictly linear contours of the building, which, with the collaboration of the light, create the feeling of a multi-level surface. 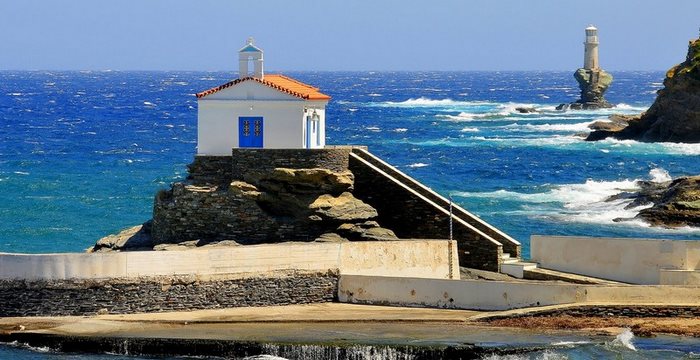 It is built on the rock in the sea, at the entrance of the country. According to tradition, Panagia Thalassini protects those who travel to the sea, along with Agios Nikolaos. A brisk evening the icon of the Virgin Mary came from the sea to the beach with a strange light. The people of the island followed the light that led them to a small cave. Surprised, in the cave, on seaweed, they saw the image of the Virgin Mary. They worshiped her and brought her to the chapel of St. Athanasius. The next day, however, the picture turned to her cave! So the Islanders decided to build a temple over the cave. The work for the construction of the temple was carried out in a rapid rhythm and Ecclesia was almost ready in a very short time. But the roof was missing because there was no wood. The Virgin Mary took care of it. A ship loaded with timber was openly threatened by the sea outside Andros. The captain, together with the sailors, asked the Virgin to save them from the imminent danger. Enlightened the boat made the wood in the sea. So the ship was saved. The timber slowly descended on the shore near the cave, in order for the craftsmen to cover the uncovered Church. Because the wood was unexpectedly found, and indeed in its time, really goddess, the Church of Our Lady was named “Theoskepasti”. 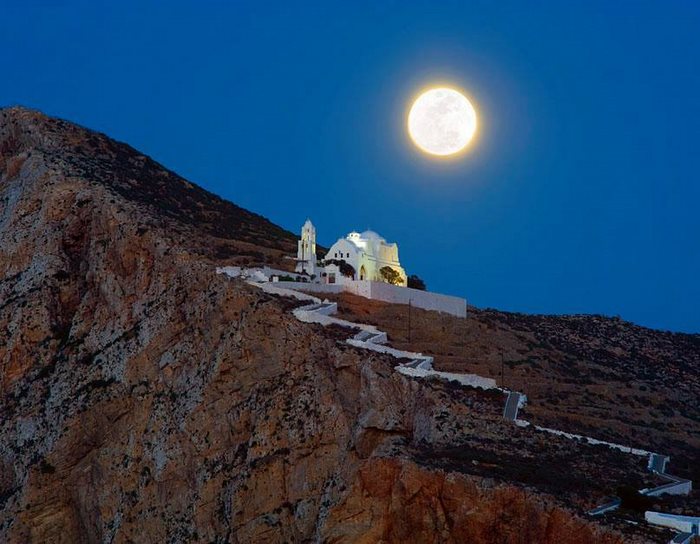 Panagia is the most famous church of Folegandros and is dedicated to the Assumption of the Virgin Mary. It is built on a rock above Chora, and is dominated by its whitewashed color at the site of an ancient temple in which building material has been used.

In the church, there is a statuary icon of the Virgin that dates back to Byzantine times. The image, according to local traditions, is miraculous and is connected with many stories of raids of pirates and other legends.

In the old days, May 1790, shortly before the uprising of the Aegean by Lambros Katsonis, 18 skirts with Algerian pirates, the worst pirates of the Aegean era, were threatened. The demented, peace-loving inhabitants of the island ran up to the church of the Virgin Mary to protect them. After they prayed with devotion and with crying despair and hope for the help of the Virgin Mary, they took her picture and carried her to the edge of the cliff, pleading to save them. Then a terrible breeze blew wildly, dragged the pirates and sank them by choking all the terrible pirates. Only a Christian captive swam to the land, and when he reached the salvation of faithful believers, he said to them that before the ships fell, he saw a great lightning descend from the rock and beat the ships. Everyone attributed the event to a miracle of Our Lady and since then the locals consider May Day a great celebration. 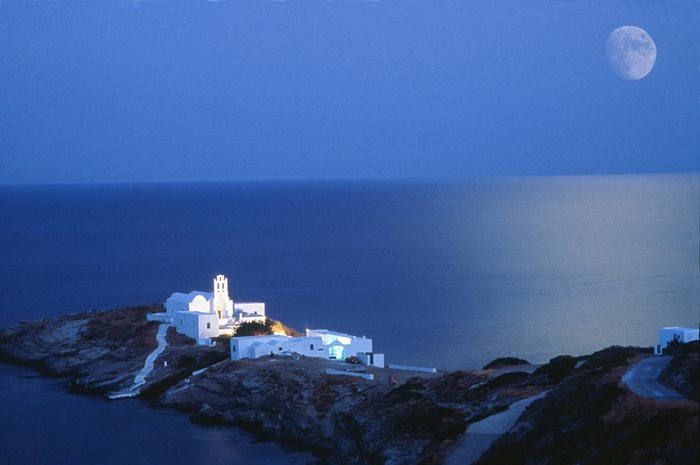 The spectacle of Panagia Chrysopigi in Sifnos as you descend the path that will take you near it is breathtaking. A whitewashed church perched on a rock literally in the sea. The monastery, which is now inactive and its cells available for visitors, dominates the small cape that separates the two beaches of Faros. It was built in 1615 to house the image of Zoodohos Pigi which the fishermen saved from the sea. 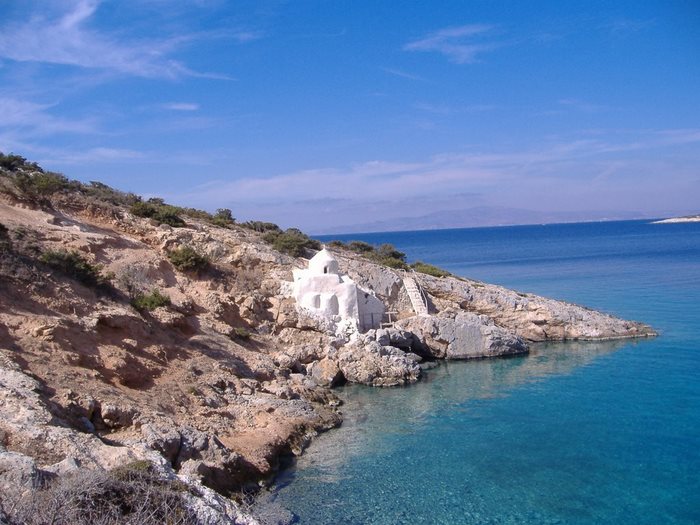 The lush, white-washed chapel of Agios Sozos, perched on a cliff by the sea in the Kalantos area, is one of those magical images that never leave the memory. It was built by a merchant who was shipwrecked in the area, and because his merchandise was oil and wine, when he gave the battle with the waves he made a vow to God that if saved he would build a chapel of oil and wine in the area. He built it, throwing in the foundation oil and wine, and gave it the name of Saint Sozos. To enjoy it, you only have to walk a beautiful path that starts from the beach of Agiassos or through a sailboat during your private trip in the Minor Cyclades 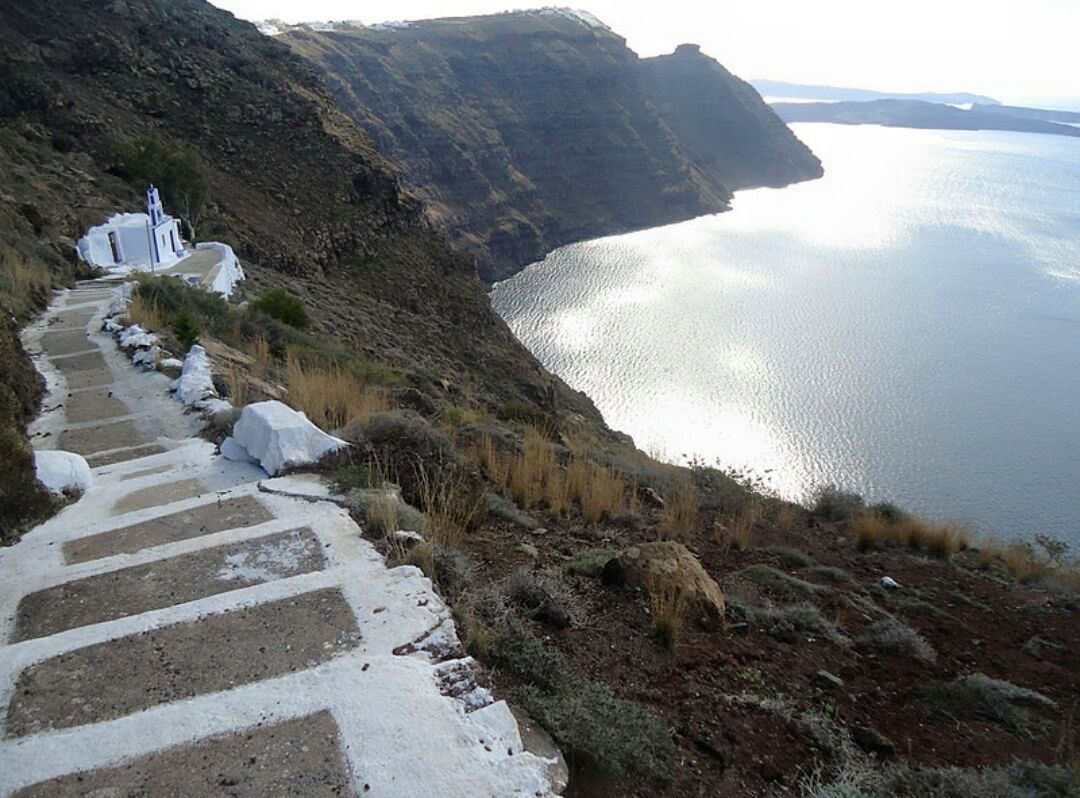 Saint Anthony “Atragoudistos” (1050) is a small chapel in the throat of Thira’s land and is located in the beautiful area of the slopes of the Imerovigli Caldera of Santorini. In the volcanic walls of the temple, there are frescoes of 1750, which in part have been defiled in the face during the Turkish domination. According to the description of the inhabitants of the area, they told us that the icon of the Saint, while they found it at the present site of the temple, brought it to the above-mentioned St. Mark’s church, but the next day they found it at its original point. This happened several times until they built the existing temple.