What Is There To See On Naxos

Home/What Is There To See On Naxos
Previous Next

What Is There To See On Naxos

They say that Zeus grew up and lived his childhood on this island, but most of us have linked Naxos to the myth of Ariadne.

East of Paros, Naxos, the largest island of the Cyclades with its almost round shape and a coastline of 148 km.

Naxos with the mountains of Zas and Fanari, the highest of the Cyclades, and the deep changes in its landscapes, today welcomes us in the always open “Portara”. In its castle town, which is still inhabited, in Apeiranthos and in its countless villages, each of which is different from the other. Naxos with its rich production and renowned local products.

6:20: Sunrise. It is dawning and Naxos wakes up and starts another creative and productive day. Naxos has been renowned since antiquity for its beauty and abundance.

8:10: Herodotus had characterized Naxos as the richest island of the Cyclades and is certainly still the most fertile today. With its exceptional local products and the wide diversity of its landscape, Naxos occupies a special position among the Cycladic islands. Internationally renowned cheeses, liqueurs, potatoes and the Naxos goat, all from the land of its own, but also from the hands of its people. People hardworking like bees. 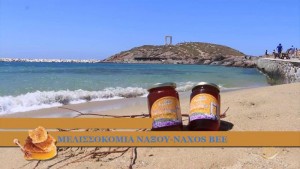 9:20: Bees. (discussion with a local beekeeper about the life of the bee and its contribution to nature and man). Naxos produces enough good quality, honey. At Naxos, there are about 90 small producers producing pure honey.

10:30: The capital and the castle. The country and the castle of Naxos have been inhabited ever since antiquity until nowadays. The castle was built by Venetian Marco Sanudo in about 1210 on the ruins of an ancient acropolis. Marcos Sanoudos, having captured 17 islands together with his companions, was proclaimed duke and made Naxos the capital of the Duke of the Archipelago. This is how the medieval period of the island started with its castle and fortification towering over the natural acropolis above the harbor. 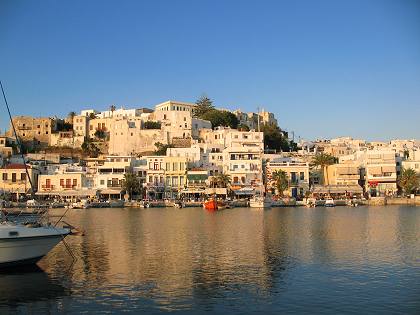 Walking today in these neighborhoods that were once crossed by dukes, French nobles, local islanders, Latino and Turkish conquerors, Portuguese, Spanish, Jews, and terrible pirates, we are wondering about the richness of history, but also the many footprints of the people here in this island. And now that the dazzling sun seems to be fading away, the bright daylight sometimes erases the signs of history. At the southern end of the castle is also the commercial school of the Jesuits, where N. Kazantzakis studied for a while.

A little further below is the Ursuline monastery and the old school of women founded in 1672.

Education and culture seem to have always been very important elements in this island’s life. In Naxos, the great playwright I. Kabanellis was also born.

This walking looks like we emerging from a journey through time and again found the modern era and the present of the island.

11:20: In the grocery store. Back to everyday life and also in a grocery store that is a sightseeing for itself, but also part of the modern history of the place. Mr. Antonis, 87 today, has lived in Naxos and his son continues to work while his grandchildren are helping in the business. Mr. Antonis has been working in the grocery since 1945, a shop that his father had made. The most demanding products are cheeses, Graviera, Naxos, the “Arseniko”, the island’s “kefalotyri”. 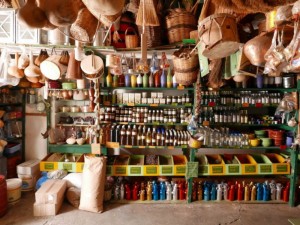 There is still a great demand for local olive oil and olives, but also for thyme honey, all produced species of Naxos. In winter, the shop also serves as a coffee shop for the residents of Naxos. The famous Graviera Naxos perfectly accompanies wine or raki and is a meze that satisfies all tastes because it can be found with more or less salt, obsolete, spicier or more neutral.

12:40 Apeiranthos or Aperathos is one of the most beautiful villages of Naxos, it is more like a part of Crete here in the Cyclades. The village has a very nice eastern orientation and looks like a large veranda with unobstructed views overlooking days and sunlit slopes. Narrow streets, Venetian towers, beautiful houses, wonderful squares with traditional café and beautiful, very nice people. Here again, in Apiranthos a linguistic idiom still survives, a language that contains elements from ancient Greek, Byzantium, and Crete. 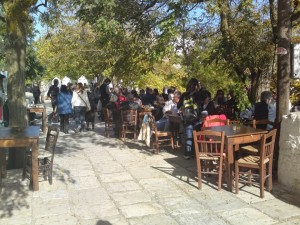 14:00 An railway in the air. Traveling for a while in mountainous Naxos, we are close to the air train. Here with Michalis Pasoulas, a former emerald miner, we visit this part of the island’s history, which now rustles in the sun, the air and the salt and tells silent stories from a past glory age. Emery is found across Europe at Naxos only in such large and good quality deposits.

Emery is an extremely hard rock with which it was mainly made of silversmiths and grinding wheels and used it as anti-slip material for floors and roads. However, its replacement by artificial corundum and competition from Turkey led to the decline of the Naxian emery. Thus, the air train that was once used to transport the smirk to the port was replaced by trucks and production fell dramatically.

14:45 The work in the mines. We go down now and enter one of the mines still operating here in mountainous Naxos. (conversation with the miners, two youngsters who have the mine from their grandfather. 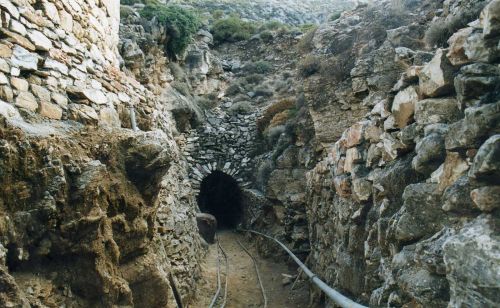 The mines in the mountain area of Naxos are family owned and transferred from generation to generation. The mines are created when a deposit is observed and begin its extraction and proceed to the interior of the mountain.

16:00 afternoon in Halki. We head to the lowlands of the island and specifically to the area of Tragia that was once the heart of Naxos. Here is another emblematic village of the island, the beautiful Halki filled with neoclassical buildings. Walking up we reach the church of Virgin Mary of Protothron. 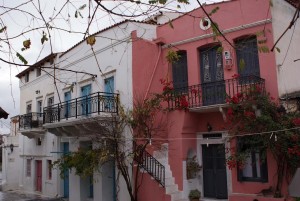 All the cultural elements of this island coexist in Chalki: Cycladic glamor, neoclassicism, Orthodox tradition and Venetian domination. From 1896 up to the present day, the famous product of Naxos is produced here. 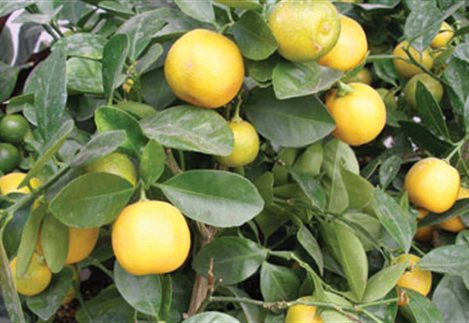 Visit the family-run “Fragiadaki” distillery which was founded in 1896. The company operates today from the fifth generation of the family and is a historical point of the island. This is where a product of Protected Designation of Origin (PDO), Kiron Naxos, is produced. Space is the same as the one in which the business started and continues to produce until today, a distiller has been operating continuously since 1896 until today. “Kitron Naxos” is a distillate from the leaves of the citrus tree. By distillation, we get the essential oils. These essential oils are also perfumery and cosmetics made by the plant.

16:50 Filoti. Filoti is the largest village in Naxos. It is built amphitheatrically at the foothills of Mount Zah, the mountain where, according to the legend, Zeus grew up. It is a large and lively village with some 1800 inhabitants with a healthy economy and culture and one of the largest festivals in the Aegean that can be seen here every 15th August.

17:30 Afternoon in Naxos. As we continue our journey, we admire the landscapes and villages of Naxos. The lovely Shangri, chapels and forgotten windmills all bathed in the clear afternoon light of the Cyclades. At the same time on the beaches of the island, people enjoy the sea. Windsurfers practiced and swimmers who simply enjoy the summer and the countless beaches of the island. Some of them, like Agios Georgios, Agia Anna, Agios Prokopios, are quite close to the “chora”.

17:50 The dances and the songs of Naxos. Music-dance performance on the beach of the country with songs and dances from Naxos from various dance clubs of the island, which mainly involve students, adolescents and young people on the island. Tradition is preserved by the young generation who is proud of their island’s culture and enjoys the traditional feasts. In Naxos, there is a wide variety of customs and customs that belong to every village on the island. Many influences, many dances, songs, idols, and attitudes. 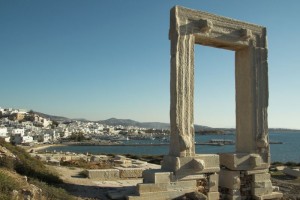 The time the sun sets. “Portara” is the site of Naxos. It is located on an island known to the locals as “Palaces-Palatia” because there according to the myth was the entrance to Ariadne’s palace. In fact, on the islet stands the central gate and everything that remained of a temple of Apollo that began in 530 BC. but it was never completed. It joins the land on a path and at that time always gathers a crowd of people because they know that the famous sunset photography with the background of the sea and this gate for nowhere is the absolute memory of the island and the holidays there. Behind us and the famous “Vrottas” with its imposing beach.

20:30 Naxos at Night. And as the night progresses, we go with her. First of all, we take a stroll from the harbor with a nice view of the town and the castle. And then we walk along with a bunch of people along the beach and walk through the narrow streets of the town to see once again how lively and big this Cycladic island is. As the time passes we arrive at the square named “Protodikeio”. 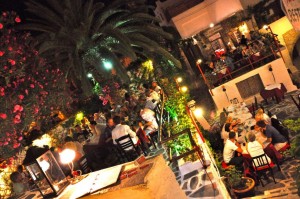 Here Naxos shows a more modern face with shops and bars that point to a more urban environment. We are now returning to the port to close another clock circle. A 24-hour trip to another wonderful country, this fantastic country called Greece.

Page load link
We use cookies on our website to give you the most relevant experience by remembering your preferences and repeat visits. By clicking “Accept”, you consent to the use of ALL the cookies.
Do not sell my personal information.
Cookie SettingsAccept
Manage consent